Does Anthony Fauci Think Colleges Should Reopen? We Asked Him. 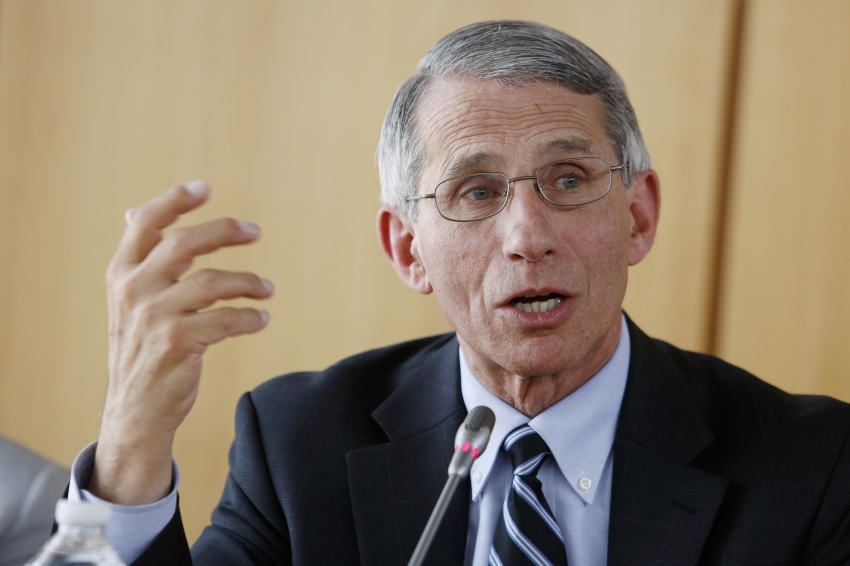 In the past week, universities have begun releasing yet more details about how they plan to bring students, staff, and faculty members back to campus in the coming weeks and months. College presidents have started to roll out the outlines of those plans, with many insisting that their final decisions will be guided by science and advice from public-health professionals.

On Friday The Chronicle spoke to one of America’s top public-health officials, Anthony S. Fauci, the director of the National Institute of Allergy and Infectious Diseases, about some of the strategies universities have said they’ll employ. The interview has been edited for length and clarity.

As colleges and universities have struggled to devise policies to respond to the quickly evolving situation, here are links to The Chronicle’s key coverage of how this worldwide health crisis is affecting campuses.

Right now, university leaders are trying to figure out what to do in the fall. Some have said they’ll open, while some are still working out what they’re going to do. What do you think they should be considering at this point?

I don’t think it’s going to be one size fits all. I think it’s going to depend on the location of where the particular university or place of higher education is, what the demography of the students is, where they’re coming from. All of these things have to be taken into account.

A number of presidents of universities have been in discussions with us at the task force, with the vice president and with others, talking about creative ways where they could continue the education and yet safeguard the safety and the health of the students. There are a variety of models.

One of the models has been to essentially test all the students before they come in, just so that you know what the baseline of infection is. Test them both to see if they’re actually infected with tests for the virus, as well as — depending upon the technology at the time — antibodies to see if they had been previously exposed.

But one of the things that I have heard — and I’m not necessarily saying I’m advocating it because I think it’ll be appropriate variably depending on where you are — is to get at least a baseline and intermittently survey the students. By baseline, meaning you know when you start on Day 1 what you’re dealing with and intermittently do random surveillance every couple of weeks or what have you. You have to have the capability when students get infected, which they will, to then get them to a situation where they would be able to be comfortably isolated if in fact they’re just waiting out a relatively mild infection. Or, if they get ill, to have the health care available for them.

How realistic do you think it will be to get all students and faculty and staff members tested before they come onto campus in some cases in August? In some cases that’s tens of thousands of people.

I don’t want to definitively speak to the availability of testing because there are people in the coronavirus task force that are much more responsible for projecting the reality of what tests will be available. But with the newer tests coming online this summer, particularly the antigen test, you could literally test thousands of thousands of people reasonably expeditiously. I’m not sure you could do that today or tomorrow, but we’re told that as we get into the late spring, early summer, that those types of tests would be available.

Now I don’t want to give you the impression that everyone should be doing that or that’s the best way to do it. I’m just giving you some models that have been suggested by some of the leadership in some universities.

Once people are back on campus and classes have resumed, what do you think would be the baseline amount of testing that you would want to see at a university?

That’s a good question, and that’s something that has been discussed with varying interpretations. I think you get the first baseline and then you do what’s called surveillance testing where you don’t test every single person, but every week or two you selectively test a representative sampling to determine if there is a below-the-radar-screen amount of transmission that you’re not detecting, because the chances of there being asymptomatic infection in a cohort of young, healthy individuals is much greater than the chance in the general population. We know, for example, for the outbreak on the aircraft carrier Teddy Roosevelt, where over 1,000 sailors were infected, an overwhelming percentage were really asymptomatic infections.

But some things are definite. For example, you need to shield the vulnerable people. So if you have students with underlying conditions, you’ve got to do the best you possibly can to protect them.

Some colleges are planning their fall schedules around the expectation that there will be a second wave this winter. Is that a reasonable strategy?

These are all open for discussion. I don’t want anybody to get the impression that I’m dictating a policy here.

There likely will be infections as you get into the fall and to the winter. What you need to do is to be able to identify, isolate, and contact trace them to the point where those little blips you might see don’t turn into substantial outbreaks.

I’ve heard of one model, which is getting people back to school at the end of August and keeping them there until Thanksgiving break. Instead of having Thanksgiving and then coming back, which would increase the chances of spreading an infection, have them get to Thanksgiving and go home until the New Year.

Whether that model works or not, what it does is it prevents the back and forth, which would be enhancing transmission at a time of the season when you would likely see a considerable amount of respiratory-borne illness.

Some college presidents have been talking about bringing athletes back to campus, really in a number of days. What kinds of precautions should they be thinking about?

The athletes that tend to come back the earliest are the football players. That’s a very intensive contact sport. What I think would be important if they’re going to do that is to test all the players and make sure that when they do come in, they come in all negative at the same time and then do the same sort of surveillance of them and make sure the people who are associated with them — the people who serve their meals, the people who are involved in training with them — also are protected in the sense of wearing masks and doing social distancing to the extent possible.

Do you think live sports events, with live audiences, should take place? Or does that seem overly optimistic?

I think it’s very difficult to predict. It’s going to really depend on where the athletic event is taking place and what the dynamics of the particular outbreak or the particular level of infection are.

If there’s very, very little infection in a community, you might have spectators. I don’t think you can have people sitting right next to each other with every seat occupied.

You’ve said that there are going to be some outbreaks, that it’s not going to be a perfectly pristine environment. Should people be preparing for there to be people getting sick and dying on college campuses this fall?

That is extremely unlikely, but there are always outliers that are not the rule but the exception. From what we’ve seen and our experience thus far with this disease, it is very unlikely that a young, healthy college student is going to get into serious trouble to the point of requiring intensive care and dying. But we’ve seen that. It has happened. It happens rarely, but it happens.

If you were a professor, would you be worried about going back to your campus?

It depends on where you are, where the campus is, the level of infection within the community. I would take special care, follow the guidelines. There’s always a level of anxiety when you’re dealing with an outbreak that is still alive. It isn’t as if we’ve completely suppressed the virus throughout the country, which always leads to vulnerability, particularly when you’re dealing with a situation where you have a lot of people grouped together as you have on a college campus. The best you can do is try to mitigate that by common sense, not hanging out in groups of many people — try to keep it less than 10. Wear a mask, keep physical distancing, and do the best you can.

Nell Gluckman is a senior reporter who writes about research, ethics, funding issues, affirmative action, and other higher-education topics. You can follow her on Twitter @nellgluckman, or email her at nell.gluckman@chronicle.com.

As the coronavirus crisis deepens, The Chronicle is providing free access to our breaking-news updates on its impact on higher education. It’s your support that makes our work possible. Please consider subscribing today.